I went out to this customers house because they said their dryer was not heating at all. When I got there I unplugged the dryer, then used my multimeter to test the 240 volt wall outlet that the dryer was plugged into, my multimeter said 240 volts across the two 120 volt hot legs.

Here’s the heating element for this model:
WP8544771 Heating Element

Thursday
Sunny and warmer. Highs 84 to 89. Northeast wind around 5 mph in the morning becoming northwest 5 to 10 mph in the afternoon.

Whirlpool Dryer Heating in Cool Down and Air Fluff

Maintenance Tips for your Dryer

Your dryer vent pipe should be made of aluminum. The white vinyl duct that was common several years ago no longer meets most building codes, because if your dryer ignites it, a fire may start in your home.

Check the entire length of the vent pipe for lint build-up at least once a year–or more often if the dryer gets a lot of use.

Note… Remove the lint from the duct–don’t just push it back into the dryer or let it clog any part of the vent.

You can tackle lint build-up in the duct with our Vent Brush for Cleaning 4″ Round Dryer Vent accessory. It’s available in 10 foot and 20 foot lengths.

The lint produced by clothes tumbling in a dryer is normally trapped by the lint filter. However, some lint invariably escapes and accumulates on the inside of the dryer cabinet. At least once a year, check the inside of the cabinet, and clean it if necessary. Do this more frequently if the dryer is used heavily.

Check and clean the lint filter after every drying cycle. If the lint filter has any rips or tears, replace it. If the filter gets clogged by fabric softener residue or any other residue, you can easily clean it with a soft-bristle brush and a little detergent.

You can also clean the chute, duct, or area that the lint filter fits into. If necessary, use a vacuum cleaner to reach into the duct and clean out any lint.

Note… If the lint build-up is severe, it’s important to disassemble the dryer and clean out the lint more thoroughly. This is often a job for a qualified appliance repair technician, because there’s a risk of injuring yourself or damaging the machine.

Having a Multimeter is a must for appliance repair for testing voltage to appliances and appliance parts, continuity/ohms on thermal fuses, thermostats, thermistors, heating elements. The list goes on and on.

This multimeter even has a temperature probe which is good for testing refrigerator, dryer, and oven temperatures.

We seem to be having lots of members coming to our dryer forum and are having their dryer motor starting to fail, after about 8 years dryer motors can simply just wear out under normal use. The sign of a dryer motor going out is when you start the dryer it makes a grinding sound and runs a little while then just stops completely.

Here’s the most common dryer motor for the Sears Kenmore/Whirlpool models with the lint filter on top of the dryer:
Manufacturer part number 279827 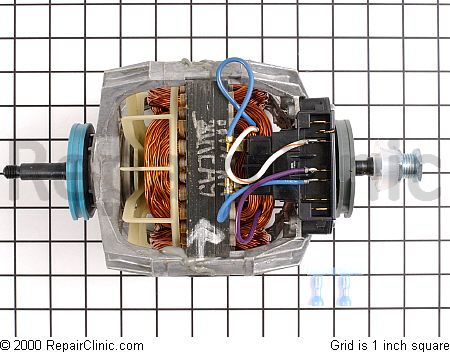 Dryer venting restrictions and clogs are very problematic for proper dryer performance. If you notice your dryer taking longer than normal or if you have to run two or more drying cycles just to get your clothes dry, I advice people to check their dryer vents first before anything else.

If you find your dryer exhaust flexible hose/ducting is torn or kinked, its best to replace it. 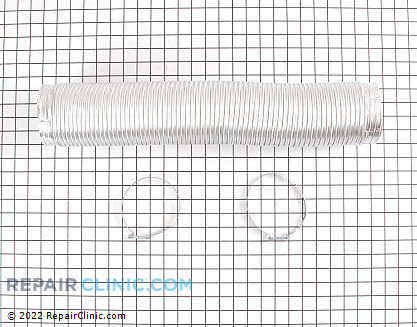