I went out on a service call for a refrigerator not cooling properly in the fresh food section, the freezer section was just barely keeping items frozen.

Also I de-iced the air duct that channels cold freezer air into the fresh food section, as condensation had formed in there and turned to ice, after the freezer fan went out, weeks before the customer called me to fix it. 2008 GSS23WGTAWW GE Refrigerator Not coming on at times

2008 GSS23WGTAWW GE Refrigerator: Not coming on at times. I went out and the customer said when it cycled off it would not come back on at times, and other times it would.

I ordered the motherboard and replaced it and it fixed it, I called the customer back the next day and he said it was working just like new again.

Here’s the motherboard(main control board) for this model:
WR55X10942P Main Control Board 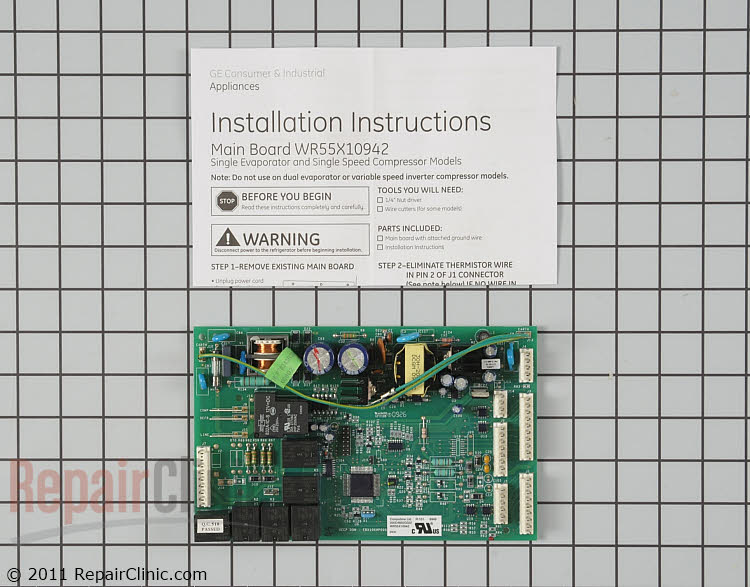 Went out to a service call on this refrigerator and it was not cooling, the compressor wasn’t running but the condenser fan motor was running. I unplugged the refrigerator, then removed the compressor start device relay and ohm tested it, my meter didn’t read any ohms on it, so it was bad. Normal would be between 3-12 ohms if it was good.

Normal ohms should be 12 ohms or less, usually around 5 ohms. I installed a new compressor start relay and the compressor came right on and started cooling. I also cleaned the customers condenser coil. located underneath the front of the refrigerator, behind the kickplate grille.

Here’s the compressor start relay for this model:
W10920279 Relay-Strt

When I arrived there was no ice at all in the ice bin that’s located directly under the ice maker. I removed the front cover, just unsnaps off, and turned the gear in the direction of the arrow, then it started cycling on its own and it put water in towards the end of the cycle.

The freezer was at 5 degrees which is good. I told the customer I would call him later that evening to see if it dumped the ice out, So four hours later I called the customer and he said no ice had dumped into the ice bin, I ordered a new ice maker and went out to install it, and he called me back saying the new ice maker dumped the first batch of ice.