My Sears Kenmore side-by-side model 106.53534300 manuf Jun 2002
started this click sound this morning. All the ice in the freezer
and all my food in it thawed out I found after wondering why the lick sound - as I never heard that sound coming from my refrig before. Now after wiping all the water up removing the food and drying it up...
I checked under the refrig and it wasn't that dirty - I vacumed it.
I unplugged it, waited a while and plugged back in. It's on a Belkin
surge protector. It clicks every 4 - 10 minutes. The refrigerator side
doesn't seem like it is keeping things as cold as it should.. but it is running.

It worked fine two days ago.
Maybe I caused it .. its my second home and I turned down the
freezer to lowest before I left ... weeks ago when I came back I pulled up the ice maker bar to make ice but I forgot to turn up the freezer to the mid mark where it should be.

Jake - Could you please send me the link on what part to buy for my problem if relay switch, which one. Thanks so much.

Here's the compressor start relay for your model you can order here:
8201786 Compressor Starting Device Kit

Is there any other part out there that will replace my fried relay?

This is the replacement for your relay: Compressor or Sealed System Component 819099

It comes with complete installation instructions.

right on! thx Jake.
I'll get that ordered.

Hello, I'm new here and I'm hoping somebody can help me out, please bare with me it's somewhat of a long post as I'm trying to be as detailed as possible and this is all very new to me.

I have a Maytag MTB1956DE* that for some reason has no exact match for my model? so I assume they are all the same parts.

Anyways, I've determined that the start relay on my model has broken, as it rattles when I shake it. Simple enough, the problem is that the original part seems to be no longer available and the suggested replacement is this: W10189190.

As you can see, it's vastly different and I have no idea how to wire this with the run capacitor as on my setup I have a total of three connections (one coming from the run capacitor has two wires combined to one, so two wires on the start relay and one on the overload) to make and I only see two avaible there and I'm not even sure if they will fit on those prongs.

Per the advice of the local parts store, I installed this, Supco PRO41, not bothering hooking up the run capacitor as per their advice, and the compressor does indeed start and fridge/freezer does begin cooling however I turned it off after a couple of minutes because I suspect this type of install will damage the compressor in the long run and the compressor itself seemed to be pretty hot so I decided to err on the side of caution and turn it off.


The Supco PRO41 does have two prongs for a start capacitor that are jumperd, but according to the parts list for my fridge it only has a run capacitor not start, so I'm not sure it's even the right one.

My question, simply, is how to replace my current run capacitor, and if indeed the relay is the same as mine, which looks identical down to the patent number, or how to wire the suggested replacement part but I'd like to avoid cutting wires if possible.

I've also seen many posts that recommend the 8201799 which also includes the overload(s) as well and I'm wondering if this is also compatible with my unit.

EDIT: I just had a thought, but does the run capacitor simply plug into the replacement model on top, and then I plug the other two wires are into the bottom? The current setup has one of the wires for the capacitor combined with an orange wire so I'm not quite sure what to make of it. Here is a pic of the old setup. That is two of the total three connections, the third is a blue wire connected to the overload. You can see the run capacitor on the top.

I'll try to make this simple and easy to understand for you. First, a run capacitor is not necessary so if you remove it and associated wires, you'll be left with two wires going to the compressor. Put the two wires on the two small terminals on this relay and overload: 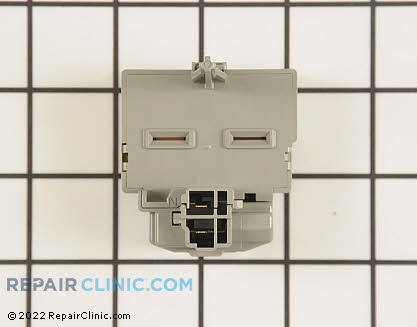 The two slots are for the run capacitor to plug into. If yours doesn't fit, like I said earlier, it's not necessary. It's only job is to save you about $1.50 over a year. Now you might have to buy a couple terminal ends to fit on the relay/overload and cut the old ones off and crimp the new ones on. I hope this helped.
OWNER RICK'S APPLIANCE REPAIR
APPLIANCE TECHNICIAN FOR 31 YEARS
REFRIGERATION SPECIALIST
ONLINE SERV TECH: ApplianceBlog.com
CERTIFIED TYPE 1; TYPE 2.....REFRIGERATION SERVICE E.S.
S

Thank's for the reply rick. I've only been stressing about the run capacitor because I've been reading online that not including it will damage the compressor and it was getting pretty hot, this is normal I take it? Will the suggested replacement, W10189190, even work without a run capacitor attached/hooked up?

So, in your opinion, should I just use the Supco PRO41 I have or should I go out and purchase the suggested W10189190 and new run cap? Also, does it matter where the two wires attach or are they interchangeable?

The two slots are for the run capacitor to plug into. If yours doesn't fit, like I said earlier, it's not necessary. It's only job is to save you about $1.50 over a year. Now you might have to buy a couple terminal ends to fit on the relay/overload and cut the old ones off and crimp the new ones on. I hope this helped.
Click to expand...

Getting clear answers has been a lifesaver, huge help! If you guys have a deal with repair clinic I'll just order the parts online as a show of gratitude.

Thanks again for the advice I really appreciate it.
Last edited: Aug 10, 2011

I repaced my compressor and left the run capacitor off. That was 15 years ago. It doesn't matter where the two wires go on the relay/overload. I've not used the Supco pro41 so I can't say yeah or neah to using it.
OWNER RICK'S APPLIANCE REPAIR
APPLIANCE TECHNICIAN FOR 31 YEARS
REFRIGERATION SPECIALIST
ONLINE SERV TECH: ApplianceBlog.com
CERTIFIED TYPE 1; TYPE 2.....REFRIGERATION SERVICE E.S.
S

rickgburton said:
I repaced my compressor and left the run capacitor off. That was 15 years ago. It doesn't matter where the two wires go on the relay/overload. I've not used the Supco pro41 so I can't say yeah or neah to using it.
Click to expand...

Thank's for your time rick, I'm going to give the OEM part a go. Cheers.

Does it matter which way I plug in the run cap?

Thought I'd post an update, all went well and fridge is up and cooling again. Thanks again Jake, much appreciated!

Hi Jake - I have a Whirlpool ED5PHEXMQ00. I found your info on replacing the start device. When I removed mine it was fried and clearly damaged. We found a part store open this morning (no small task on labor day weekend). We installed the new start device but the compressor will not start. Is there something I missed? The fridge started to make a buzzing noise on Tues night when the compressor tried to turn on. I did not realize there was an issue until yesterday when I noticed everything in the freezer was beginning to thaw.