Spouse complained that the dishes in the lower rack were not getting clean. She opened up the dishwasher mid-cycle to find that the lower jets were not working. I looked in and found a "sludge" coming through some of the nozzles. Removed the lower washer arms. These are the kitchenaid dynamic wash arms driven by a motor. I noticed more of the sludge throughout the machine, in the tracks, etc.. On review it looked like it was inside the arms so I took them apart. It doesn't look like the arms are meant to be serviceable, but just about everything can be if you try hard enough. I would post pictures, but it wasn't pretty. I had to use a dish brush to clean everything off. Took out all the plastic parts throughout the entire machine and cleaned them all out. The stuff was throughout the entire sprayer system. The best I can tell is that a heavy load of pasta made it into the dishwasher and was "distributed."

I put my GoPro in during a rinse only cycle to make sure all the jets were working well. Everything was flowing appropriately other than the washer arm not rotating. It looks like it wants to rotate, stutters along, and then stops. My first thought was that I broke it. The main part I removed is just a garnish that covers the gears on top. I verified everything was moving freely and the main drive gear ring was secured tightly.

There were no error codes after the diagnostic cycle.

I was helping you with this dishwasher and you never came back to update your thread here:

Issue started a few days ago. Thought we forgot to turn on the dishwasher. Later realized it shuts down mid cycle. Unit is about 2 years old. Dishwasher will run like normal and then stop mid-cycle. Control panel dead, no lights, no button feedback. Attempts to diagnose: 1. Verified...

Will update the other thread.

This is a model I haven't worked on as of yet, so I'm not sure what makes that gear turn the spray arm, we need to see the service manual to investigate.

Ok, I located the service manual, looks like the rotating inlet filter assembly forcing that gear to run the spray arm. 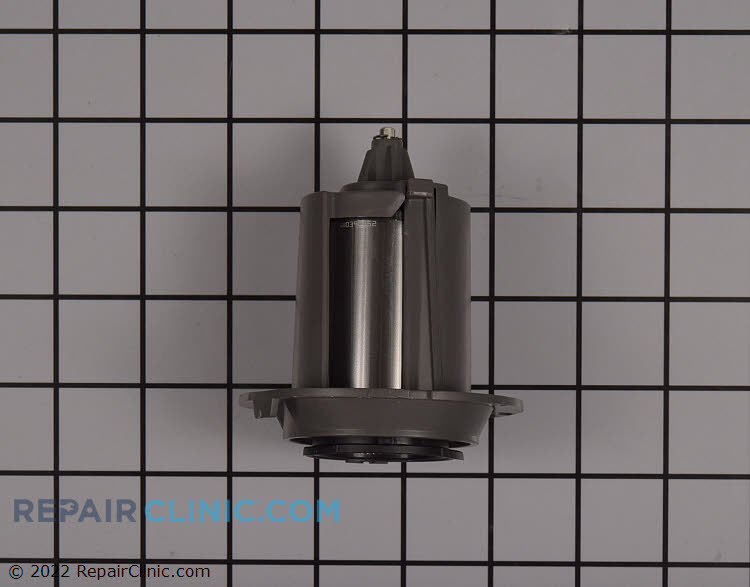 A couple other members found it broken and was causing a similar issue.

Disconnect power to your dishwasher. Then you will need to remove the dishwasher from underneath your cabinet.

I looked through the parts diagrams and took everything apart again last night. It looks like the diverter motor is what turns the gear, not the inlet filter. If I take the cover off (part 3 in the diagram) I see a thin metal rod coming up through the diverter disk. When the cover is on, the stud fits into the rotating gear. I believe the metal rod turns the gear and the plastic section just below it turns the diverter disk. I checked the rod for any play and didn't find any.

On one of my videos I removed the spray arm to see if water was coming through the central port (to get into the spray arm). I noticed that it doesn't look like the gear turns the entire time water is being pushed through the central port, just sometimes. There are three consistent bursts when the unit starts with no gear turn. Then after that, there are some periods where water is coming through the central port and the gear isn't turning. I am aware that sometimes water is diverted to other sprayers so there is no water (and no gear turn) at the bottom. If it was an intermittent motor issue, the arm would still rotate smoothly and consistently while it was turning. So still perplexed.

No, the only job the diverter does is divert the water from the lower spray arm to the upper spray arm.

Wait, you are correct, on this style the diverter motor and lower wash spray motor are incorporated together in this one unit. 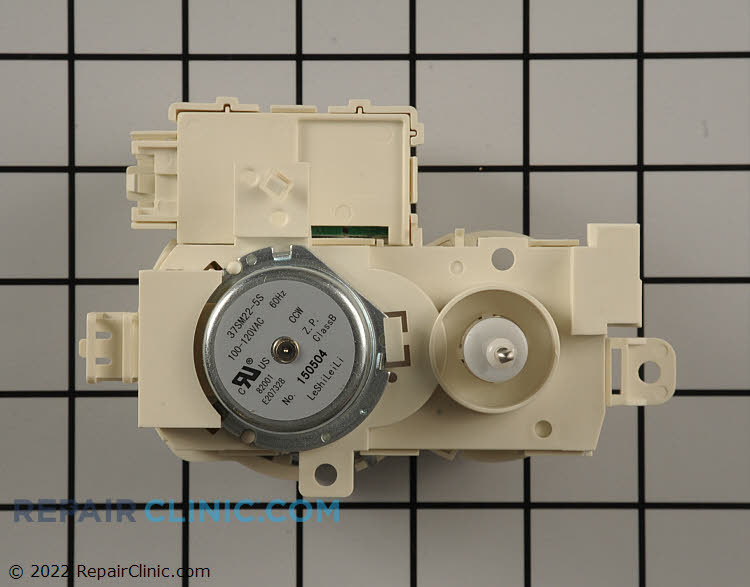 There is a video in the part link that shows you.

I just located another member that had a similar issue:

I feel like a regular here with this terrible dishwasher. I replaced the lower spray arm motor(yes this unit has a motor for that) and control board 5 months ago. I replaced the vent fan last year. Unit is filling with water. Spray arm motor spins but no water comes out of the spray arms. I...

Based on the symptoms do you think its the wash motor? Is there a way to check? Thanks for taking the time to look again.

Either that or the diverter motor/lower spray arm motor.

On Page 6-16 in the service manual it tells you how to test the lower spray arm motor.

I spent some additional time getting familiar with the service manual and I've been making a big mistake. I assumed the "letters and numbers" at the beginning of the cycle were sensor checks and all errors were reported at the end of the cycle. I ran the diagnostic again and saw the following pattern before the machine started working:

So it looks like the mystery is solved. Will either get a diverter motor or entire lower assembly.

I wonder if a short in the motor would have caused the unit to shut down and not power up in my prior issue--- or maybe the short caused a failure of the control board.

I know KitchenAid had a problem with the vent shorting out, thus causing those machines to not run through a complete cycle.

But I don't know if a short caused this problem.

After a long day of trial and error, it's finally fixed. I purchased the entire assembly to make things easier and prevent leaks. Used rinse aid on all the seals as lubricant (big one at the bottom of the tub, turbinate sensor, and drain pump/sump). After a little gentle wiggling everything went in well.

First mistake, I forgot to clear the prior error codes, so I thought I was still having a wash motor error. Pressed the hi-temp key during the 10 second pause to clear the error codes. Ran the diagnostic again and no customer error codes or service error codes. Thought all was good until I used the gopro again and realized the arm wasn't spinning.

After lots of reviewing the video I realized it turned for a bit and then stopped. It also bound up against the side. I kept trying to position it like in the video but it still wouldn't move right. After reviewing the manual I came across this little line one page 1-4 that got me thinking: "Small secondary arms - timed out of phase with larger arm to optimize side wall coverage."

This latest problem was related to one of the first things I had to fix-- all the buildup in the arm. To get all the gunk out I had to take the arm apart, including some of the gears. Turns out the gears are timed like an engine. Not only had I taken the gears out, I had taken the geared sprayer off to clean it. That made things even more complicated to figure out.

If you also take off the geared sprayer like I did, there's a small triangle on it as well, but I couldn't find a triangle on the gear it interfaces with. I made sure the triangle on the big gear and smaller gear on the bottom were pointing at each other, then set the arrow on the sprayer gear to interface with the smaller gear it turns. There's only one point of contact due to the size.

The last step is attaching the sprayer to the gear. I watched some youtube videos of how to replace the lower spray arm. I paused on the frame where they show the bottom. I positioned the big gear on the bottom the same way as in the frame and then attached the geared sprayer so it was in the same position at the video. I reinstalled the sprayer and everything works fine. After a long day of trial and error, it's finally fixed. I purchased the entire assembly to make things easier and prevent leaks. Used rinse aid on all the seals as lubricant (big one at the bottom of the tub, turbinate sensor, and drain pump/sump). After a little gentle wiggling everything went in well.
Click to expand...

Excellent finnimus, glad you were persistent on this and glad to hear the complete wash motor assembly which includes the diverter motor/lower spray arm motor fixed it.

After lots of reviewing the video I realized it turned for a bit and then stopped. It also bound up against the side. I kept trying to position it like in the video but it still wouldn't move right. After reviewing the manual I came across this little line one page 1-4 that got me thinking: "Small secondary arms - timed out of phase with larger arm to optimize side wall coverage."
Click to expand...

I was not aware of that either.

And Also the gear lining up per that ARROW.

Thanks for the detailed update! That will definitely helps others as well. Paying it forward is ALWAYS good Karma!

Hopefully the final final update. I ended up purchasing the three point wash arm anyway. I paid special attention to the alignment markings of the new one before putting it in. I think it's important to point out that these aren't meant to be taken apart.

The arrows shouldn't point at each other, they should point in the same direction. Please see attached picture. It's hard to describe the location of the arrow on the geared sprayer. I provided a pic so the next person can try to line it up on their own.

Here's what I would do knowing what I know now. Before taking it all apart, align both bottom arrows. Then turn the big gear so the arrow on the small gear is aligned with a line on the bottom of the sprayer. It looks like a line of plastic that was added as a reinforcement. This gives you a precision marking point. Without moving the geared sprayer or the bottom gears, turn the sprayer over and find the arrow marking on the sprayer gear. It's on the top side of the gear, just under the actual sprayer. Mark the arrow's location on the plastic lower part of the sprayer arm. Now if you take everything apart, you know exactly where the sprayer gear should be if you align the bottom arrow with the reinforcement line on the bottom.

Sounds good finnimus, thanks for the update and the added information, that's good to know!