Hi Guys,
First, I'd like to thanks the Admins, Techs and Contributors to this forum for all the help your posts have provided in the past!

We purchased our KRMF706ESS01 (s/n K730xxxx) Fridge in late-2017 after Hurricane Harvey claimed virtually all of our household appliances.
Since then, it has proved to be both the most expensive AND most unreliable appliance we have ever purchased - we are already on our third RC Evap Fan (with sensors), our second icemaker, our second two-way water distribution valve, our second Pantry UI Board and our second Condenser Fan.

- Although there are probably other scenarios that could cause the same symptoms...

I have two Main Controller Boards (from previous experiences), and get exactly the same results with both.

Both FC and RC Thermistors show a pass (01) on Service Tests 1 and 2 respectively, but I've yet to find a test that shows the actual temperatures that the MC board thinks that are current (I gather from other posts that some KitchenAid models do have this feature). I may be missing something here...

I do have one question - Thus far, I haven't had to delve into the FC control hardware, so I'm unsure where the FC temperature-sensing thermistor is located - Does it come with the FC Evap Fan assembly, along with the defrost thermistor, like the the RC Evap Fan?

Any suggestions as to the root cause of this issue would be most welcome - I'm reluctant to add to my collection of KitchenAid parts by trying to shotgun this issue - The parts are so overpriced.

Thanks, and Best Regards,
Pedro.

Update - Answered my own question re the FC Thermistor location - Found the video!

See the photo below? BOTH thermistors ONLY come with the Refrigerator Compartment evaporator fan motor assembly. The brass one is the evaporator thermistor that clips to your evaporator coil. The WHITE one is the RC temperature thermistor.

BOTH should read the same ohms per this chart: 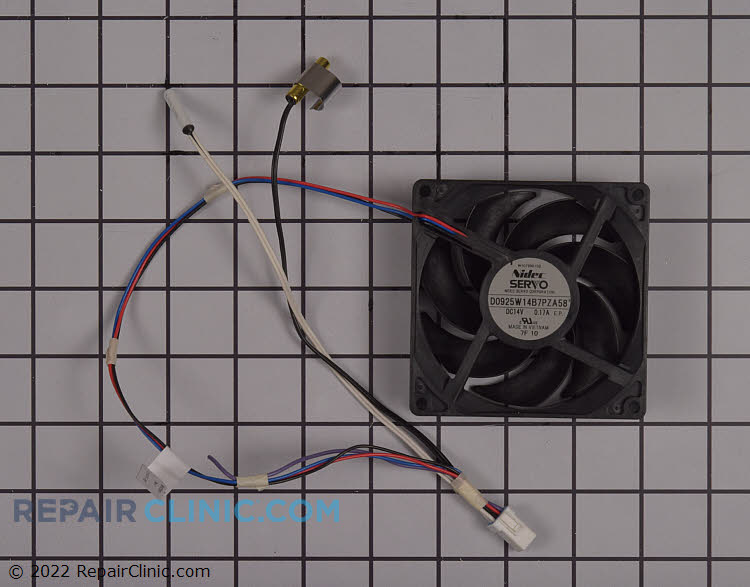 pedrotech said:
Update - Answered my own question re the FC Thermistor location - Found the video!
Click to expand...

FIXED - The root cause of the problem was my own negligence...!

After the most recent RC Evap Fan replacement, I had neglected to re-install the front kickplate (grille) below the FC drawer, assuming that it was just ornamental trim.
It wasn't until my wife complained about "fridge bits" lying around the kitchen that I went to re-install it, and found the problem.
There was ice on the plastic underside of the FC in the middle, which could only be seen with my ear on the ground!

The kickplate has a bevel (ramp) on the upper edge that guides the seal along the FC Drawer lower edge in an upward direction as the drawer closes.
Without it, the lower edge of the drawer seal droops in the middle, and the retaining flap of the seal drops out of the groove in the drawer front.
Had to remove the drawer front and tease the seal retaining flap back into its groove using the blunt edge of a table knife. Fortunately it hadn't stretched too much.

This essentially fixed the problem.

I later realized the fridge was ignoring the user-selected temperatures for both RC and FC, but a replacement of the door-mounted UI board W11330971 solved that issue (see photo).
Does anybody know of an outfit that repairs these things?

Embarrassing, I know, but I thought I'd share the experience to avoid repetition...
Pedro.


pedrotech said:
Does anybody know of an outfit that repairs these things?
Click to expand...

That I don't know, hopefully another tech or member will know.

S
Kitchenaid KRFF507ESS01 RC not Cooling but mysteriously is now