My model number is DU960PWKS1. I read the linked thread below carefully but I believe there are some differences in the parts for my model.

I have an older Whirlpool Quiet Partner II that will not drain. Wash cycle runs normally, but the basin is full of water at the end of the cycle. For a while the dishwasher was not completely draining, with some water left in the bottom. A second push on the Cancel/Drain button would remove...

It does not appear to have a check valve flap for instance. It has three check balls instead if I’m reading the parts diagram correctly.

I had a technician come out and check the unit, two in fact. One of them looked at the dishwasher and indicated that the likely cause was an obstruction in the drain hose running from the unit to the disposal, which is quite long. There’s no obstruction in the air gap because I used a little trick I saw online were you blow through a cardboard paper towel tube and could feel the air coming through into the disposal. I will admit that there’s a slight kink in that hose as it bends around to come into disposal unit. As I recall I installed this disposal myself and I’m not an expert plumber by any means!

The second technician vacuumed out the drain line and said that there was no obstruction there so he advised that if there were further problems I probably need a new unit. He said that sometimes the pump motor, and this dishwasher is 13 years old, can still work but just not have the same power that it did before. I found that kind of dubious but he was the expert.

I just now pushed the drain button and the small amount of standing water at the bottom of the dishwasher did in fact drain out. So I’m wondering if the problem is the drain valve as described in the thread linked above.

I have not gone through any of the other steps in that thread such as dismantling around the pump but again some of the parts might be a little different. So any input or advice would be appreciated.

Your model DOES have a check valve.

I'd check your check valve first for a clog.

Its easy to get to, just remove your lower access panel below your door, than unclamp your drain hose off from it, then get some pliers and unscrew it from the pump/motor assembly.

There should be just a black rubber flapper inside that check valve, push something through it, like a pen, it should go through. Also flush it with water from your sink.

Here's the check valve for your model:
Check Valve 675238

Here's the video that shows you how to remove and replace it: This video provides step-by-step instructions for replacing the check valve on KitchenAid dishwashers with model prefix 665. Learn more from the experts at Repair Clinic.

If that's fine, then its possibly the drain impeller that might be cracked or broken.

Here's the impeller kit for your model(The smaller gray one is your drain impeller):
Impeller and Seal Kit 675806

The hose seems to be very difficult to get off the fitting even after the hose clamp is removed. I also noticed that the drain hose is pinched pretty much flat as it bent back to go to the back of the unit. I wonder if that’s where the problem is.
H

I got the hose off. No obstruction in the valve. I have to wonder if it’s the kinked hose. The water flowed freely from the bottom of the dishwasher once the hose was removed.

This photo doesn’t really illustrate the situation well. The kink is visible just about at the top of the towel, but it goes really flat when bent back to slip over the end of the valve.

Ok good., then put the drain hose back on the check valve and do a rinse/drain and see if it drains good and fast now.

The problem is that the hose flattens again when it's curved to fit into the valve. So I think I need a new hose that's
a bit longer to allow it to curve gently and not kink. Do you agree? If so, what's the best type of hose? I've been told that the corrugated kind is better than the black rubber one I have. Do you know the size? I forget to measure before I put the old one back on!

I know, I can take the cover off and measure it!

This is the drain hose you need: 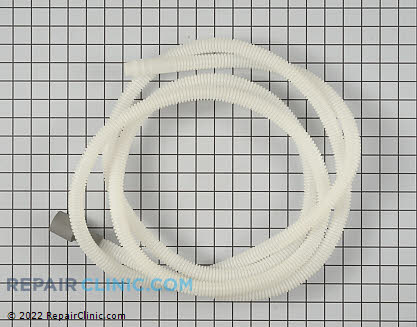 I got the new hose on and everything seems fine. The unit is draining now!

Taking out the old black rubber hose was a pain because that hose plus the water line and power cord were stuffed through holes in the cabinet that were too small. I can see were a file with used to remove material outside the original circular drilled hole. I finally use the Dremel tool with a cut off disc to slice the old hose, then using a hammer and a wood dowel to force it through the opening. Putting the new one it was pretty easy

thank you very much for your help. He saved me at least $500- $600 compared to buying a new machine.

C
Whirlpool Quiet Partner II - normal and cancel button lights flashed. I powered unit off then on, pressed lots of buttons & it worked - Why?

J
Whirlpool Dishwasher WDF320PADB3 not draining at end of cycle