So about a year ago I started having an intermittent issue where my LG Washer WM3360HVCA wouldn't power on. Either unplugging it or doing the hard reset, sometimes leaving it unplugged a couple hours or over night if necessary, but it would start working.

Long story short, home warranty company included with my home purchase took 6mo to fix it and the problem had mysteriously solved itself by then. This was March and they replaced the main control board. It wasn't currently failing, so it's impossible to confirm if that was actually the issue.

Now, I went to use it last night, it powered on, then completely died before I could start the load. This is the first time I have had any failure to power on issues of any kind since Feb or Jan... before the main board was replaced. Tried unplugging it a dozen times, hard resets every time, left it unplugged overnight. It's a paperweight.

Another site is saying the front display board is a common cause of this, though almost everything else has said to replace the main board.

I'm a mechanically inclined person, understand how a multimeter works. I have no issues trying to troubleshoot this, but I don't know where to look.

-breaker isn't tripped
-outlet has power
-took the lid off and inspected any connector I could find for issues
Last edited: Sep 30, 2019
P

Got information via another site. Tested Voltage between the Black and Orange/Black and Yellow wires going to the display board, which I'm told should've been 12V and 5V DC respectively and they both read 0. So it appears the already replaced main control board has failed again unless I'm missing something.

When order parts from AppliancePartsPros and RepairClinic, you have a 365 day warranty on ALL parts.

Here's the control board for your model:
Machine Control Board EBR78263910 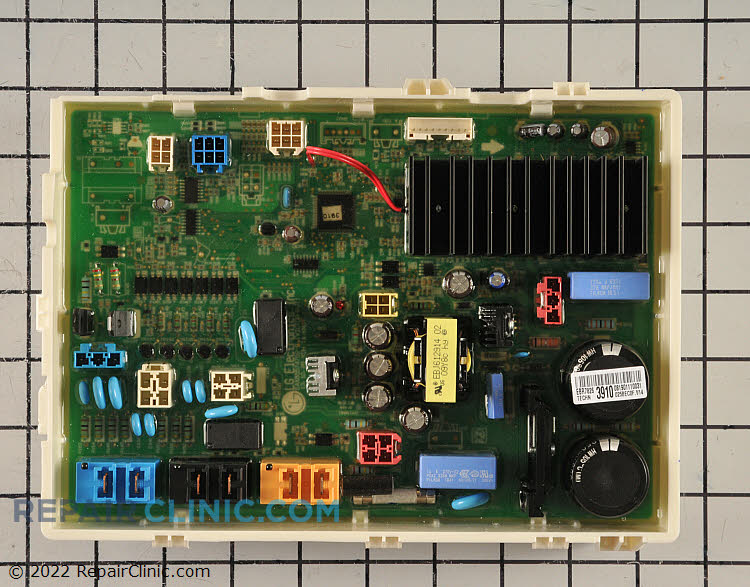 I ordered one from Repair Clinic around the time I made the previous post... I wanted to be able to do laundry today, heh. And I have no idea where they got it exactly, the crappy home warranty company sent it directly to me. I might try to find out so I can warranty it out to have a spare around.

Thanks for the reply. It's insane to me that this is this much of an issue.

I always tell my customers if you want the extended warranty ALWAYS buy it through the manufacturer.

The board on the left is the old board.. The new one has only 13 connectors instead of 14, it's missing a single wire one in the top left corner to the left of the blue box shaped piece. They are obviously slightly different throughout, vastly different in a few areas...

Is this a new part designed to replace the old one (hopefully to stop these issues,) or do I need to get the correct component somewhere?

Verified the missing pin is a single wire going to ring terminal for ground.
P

The correct part number for this is now EBR78263910 (right in pic,) this supercedes EBR64144920, which supercedes EBR6414908 (left in pic.) There is a white connector with a single terminal that is missing from the newest board. It's got a green wire with a yellow tracer going into it, it just goes to a ring terminal chassis ground lug, so it's safe to leave hanging.

My washer is currently running a load with that plug undone, so I can verifiy that it is in fact a valid replacement part.

So everything is good now?

Yeah, it's all good now. Thank you very much for your help.

I know you SAID it was the right one, and that's the one I had ordered. But I hadn't verified that it was ACTUALLY correct at that point. I've had several car parts where Part B "supercedes" Part A, but Part B does not fit, plugs in but doesn't function, or will fry Part X elsewhere in the car, so I didn't want to gamble that it NEEDED that ground wire, maybe it needed to be moved to an open pin in another connector, or replace one, or soldered into another wire coming out of the board, I had no idea. One of my cars has a different serpentine belt size listed for all 4 years it was manufactured at Autozone and Oreilly and all 4 years are identical mechanically... only one year's size actually fits.

So I called repair clinic, they didn't know, but were looking into it for me. I talked to Appliance Parts Pros and said I'd buy theirs and return the other if they could help me with info, they vehemently stated that this one would NOT work in my machine and all replacements were discontinued. I posted here. Finally I stumbled upon reviews for the board for repairclinic.com stating that despite the missing connector and need to leave the wire hanging it is correct and has worked for people, which is all I had been looking for.

As to your warranty comment, I only had the home warranty because my bank required it as part of the purchase of my house or something. I don't buy extended warranties with the exception of my cell phone.
Last edited: Oct 2, 2019

When I sold my house in Oregon in 2014 to move to Arizona, my realtor told me its best to pay for a 1 yr. home warranty to the buyer for good measure, I agreed.

That's the 1st I've heard of a bank requiring a home warranty to buy a house. I'll look into that more from my realtor here in my area.

That's usually what homeowners insurance is for, for fire and windstorm damage to appliances.

Why would the bank care if your appliances are working or not as long as they get their mortgage payment monthly. You see what I mean.

All I know is the seller had to pay for it and it saved me $200 on the first board so I'm not complaining.

Ok, then its probably what I did when I sold my house in Oregon to the buyer, provide 1 yr. home warranty at my cost, then the buyer has the option to keep it going on their dime after 1 yr.

Glad to hear your back in business.

P
FIXED GDF610PMJ2ES GE Slate Dishwasher that powers off and on randomly, UI Board replaced still no power